What is an Air Purifier with Ionizers? 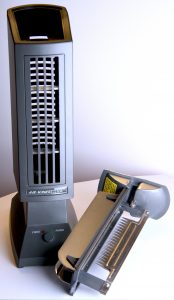 Air purifiers come with an ever-increasing array of extras, which may seem daunting at first glance. There are all the different filters, settings, and oftentimes, words we don’t know. One such extra which is very common is an ionizer.

An air purifier with a built-in ionizer helps to clean your home’s air with the help of negatively charged ions, which help to remove particles, odors, and pathogens from the air. Ionizers do wonders for people with allergies and asthma, in addition to other respiratory issues.

We will teach you all you need to know about air purifiers with built-in ionizers. More often than not, these units are sold as “3 in 1” to “5 in 1” units, which include several other systems which all serve to clean the air. We will examine the perks of purchasing an air purifier with an ionizer, and explain why such a system is important.

Air ionizers are machines that charge the air molecules which pass through it. These charged particles attach themselves to odors, pathogens, and other particles in the air, which makes these airborne irritants either sink to the ground or become easier to be filtered out. Both things result in the particles being removed from the air you are breathing, which can work wonders for people with breathing difficulties.

Just like with magnets, opposites attract in the realm of airborne particles. When positive and negative particles bind together, they become too heavy to continue floating about in the air you breathe, and they sink to the ground, out of your airspace. This results in cleaner air for your breathing!

If the particle remains suspended in the air, it is now a lot larger than it used to be, which is where the air purifier’s job comes into play. These larger particles are easily filtered out by your air purifier’s filters, which also means these allergens are being removed from the air you are breathing.

WHAT SHOULD I BUY, ELECTROSTATIC PRECIPITATOR OR ION GENERATOR?

We prefer electrostatic precipitators over ion generators in most applications simply because they make less of a mess. This is because the precipitators ionize and then capture the ion-affected particles on a (generally washable) plate. Conversely, an ion generator releases all those ions into the air, which can result in a lot of dust accumulation.

An air purifier can serve to limit the accumulation of all of the particles which can be endemic to homes with ion generators, but they can’t get 100 percent of these particles. If you purchase a machine with an ion generator, you will have to be prepared to deal with particles collecting on the ground, and many other surfaces.

WHAT ARE THE BENEFITS OF AN IONIZER?

An ionizer has a lot of the same benefits of an air purifier, as it cleanses the air of smoke, mold spores, dust, pollen, bacteria, and even household odors. This means a lot to people who suffer from allergies and respiratory-related illnesses. This means that even people with asthma can reap the benefits of owning an ionizer!

Air ionizing systems are also relatively cheap! That is why so many companies tack them onto their existing air purifiers. Your air purifier’s ionizer can likely be turned on and off at will as well, which is also very nice.

Air ionization is cheap and effective, so some air purifiers at the lower end of the spectrum only utilize ionization. This can be good, or bad, depending upon your needs. We usually recommend shelling out a little bit more and getting a unit with a filter, as these actually remove the allergens and pollution from your environment. If money is your concern, check out our post on finding a cheap air purifier worth buying!

The issues addressed by air ionizers are also attended to by countless other air purifiers on the market. An ionizer can help to further clean your home’s air, but it is more of a redundancy than a necessity if you are already buying an air purifier. Below you can find the drawbacks and even the hazards of operating an ionizer, which is why we recommend purchasing and operating a standard air purifier.

WHAT ARE THE DRAWBACKS OF AN IONIZER?

One key drawback to an ionizer is they can actually increase the amount of dust in a room! This is especially true if you don’t have an air purifier that can take care of said dust.

Why does an ionizer make more dust, that you’ll have to clean up on your own? Well, that is the ionizer showing you it’s working right! When the particles in the air of your home are met with the ions from an ionizer, they sink to the ground, hence the dust accumulation.

As annoying as needing to dust can be, all of that dust would otherwise be in your lungs, which can cause your allergies to flare up. For many people, avoiding allergies is worth the price of having to dust a little more than usual!

Reduce Your Dust In The Air

Is dusting an issue for you? Well, some ionizers can actually keep the dust within themselves by using corona discharge and a collection plate. Oftentimes these plates are washable as well, which is a lot cheaper than buying filters!

However, there is one drawback that must be addressed with ionizers: they can be prone to generate ozone. Ozone can irritate people with allergies and asthma. Some manufacturers have made steps to address the ozone issue with ionizers, and others haven’t so be sure to study up on if you are buying from a responsible manufacturer who lays all their cards on the table.

In addition to being troublesome for people with breathing issues, ozone can also negatively impact children and newborns as well! Your child’s lungs need time to develop, and ozone makes this difficult, as the ozone actually damages their lungs! Check out our article on finding safe air purifiers for babies to learn more about what you should look for, and avoid when you purchase an air purifier for your newborn.

Things to look for when you look at a manufacturer’s or retailer’s page in search for ozone information will be if they worked to limit, or eliminate the production of ozone. If the manufacturer mentions such efforts, then that’s great news! It is recommended to buy a unit that generates less than 50 ppb (Parts Per Billion), as these will most likely not impact your health.

Is Your Ozone Above 51 ppb?

The EPA (Environmental Protection Agency) found that levels of ozone above 51 ppb can irritate people with sensitive lungs. Above 100 ppb it is unhealthy, and above 200 is dangerous. If a manufacturer fails to make mention of how much ozone their ionizer makes, then it may be potentially dangerous.

If you have concerns with the amount of ozone your ionizer creates, then you should operate it when the room is vacant. Oftentimes, the air ionizer portion of an air purifier can be turned off, which helps to address this issue. Ozone is unstable, which means it breaks up quickly, leaving your air safe to breathe once again (note if there’s a lot of ozone, it can take longer to dissipate). 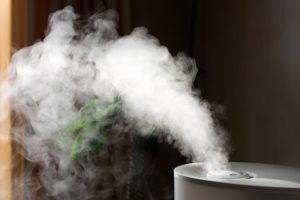 SHOULD I GET AN AIR PURIFIER WITH A BUILT-IN IONIZER?

The air ionizer industry has a history fraught with issues. That being said, a lot of air purifier companies still deem ionization of the air useful in cleaning the air of particles. In the end, this is really your decision, we’ve told you the potential risks in owning an ionizer (the generation of ozone), and outlined the benefits.

A lot of ionizers have been improved in ways that limit the production of ozone, making them safer to use in your home, but at the same time, some manufacturers haven’t made these strides toward safety. It is up to you to do your due diligence to ensure your ionizer is safe to use!

Is An Ionizer A Redundant Machine?

We recommend buying just an air purifier if you’re in the market. Ionizers can be potentially hazardous to your health and can be costly additions to the air purifier. You probably don’t want to spend additional money. As we previously stated, an ionizer is really just a redundant system. If you are buying an air purifier, since they address many of the same issues.

If you buy a quality air purifier, namely one with a HEPA filter and a carbon filter, then there truly isn’t a compelling reason to pay extra for one with an ionizer. Air ionizers can be dangerous because of the ozone they are known to produce, while air purifiers don’t make any of these pollutants.

If you are willing to pay a little more for an air purifier and had been previously drawn to one with an ionizer, then perhaps we can direct you toward purchasing a unit with a UV sanitizer instead. UV sanitizers, unlike ozone, are not dangerous to humans, instead, they kill pathogens in the air.

Ozone is a gas which is comprised of 3 oxygen atoms. The air we normally breathe just has 2 atoms. This gas is created when an electric current is passed through oxygen. Ozone is an effective tool for sterilizing areas, and it also protects our planet from solar radiation.

Why Should I Buy an Air Purifier?

Why shouldn’t you? (We jest)

This truly depends on where you live, and your health needs. We highly recommend using an air purifier for those of us who live in cities and suburbs. This helps to combat all of the gross stuff in the air around us. We also recommend purchasing one if you suffer Every. Single. Snotty. Spring Fever in agony as you (literally) blow your way through boxes of tissues.

Where Can I Find Air Purifiers for Sale?

Air purifiers are sold just about everywhere nowadays. You can find air purifiers online or in many home improvement and department stores. You can even buy used units online, or at garage sales.

What is a HEPA Filter?

A HEPA filter is a special type of air filter for air purifiers. HEPA filters meet rigorous standards set in place by the US Department of Energy (DOE). These standards ensure that the filter will capture at least 99.97% of the particles that pass through it. This results in extremely clean air.

What is the Smell Created by Some Air Purifiers?

Most air purifiers don’t put out any smell at all. This is because they are often used for odor mitigation. However, some air purifiers do release a potentially dangerous gas called ozone. Generally, you only have to worry about ozone and ion generators generating ozone. Since they utilize electricity specifically in their purification process, as this often creates ozone.

link to Water Based Air Purifier

Water Based Air Purifier - Air Cleaner For Your Home The best water-based air purifiers, or personal air cleansers in general, are eco-friendly. They are made with safe, recycled, and recyclable...

Sometimes we are unaware of our health needs in order to breathe or sleep better.

We invite you to read our articles and find out about Radon, Water based air purifiers, humidifiers and more...

If you have a basement, maybe you need a dehumidifier. Or, maybe you have allergies, pets or a smoker in your home.

Press the 'HOME PACKAGE' tab below for more information.

As an Amazon Associate I earn from qualifying purchases.